Wilfred, who is estimated to be around 15 years old came from a home where she lived with another sibling cat and an older single owner.  The sibling passed away several months before her owners condo was foreclosed on and she had to leave the property.  The owner notified the local animal control officer who was able to trap Wilfred and get her to a vet where it was discovered that she needed some medical care. Wilfred was signed over to animal control at this point and after some medical care joined the Sanctuary in late June. 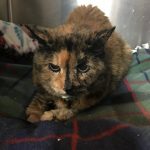 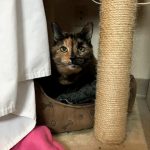 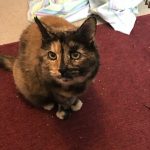 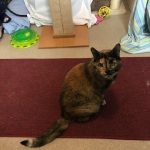 Wilfred has been doing really well in her new upstairs room at Sebastian House. She gets a lot more sunlight up there which has been encouraging her to come out a little more and nap in more open spaces. She enjoys some visits especially when treats are involved, and has been seeking more pets and head bonks.