Trapped as part of a TNR project in New Britain in March of 2017, the vet discovered that Josie had a circumferential wound at the base of her tail. Her tail was paralyzed and needed to be amputated. Most of her teeth were also missing with just 2 remaining.
After the surgery, the vet discovered that she had deficits in both her hind legs and walked with dropped hocks. This, along with possible hearing issues made it impossible to release her back outside. Her options: euthanasia or come to the Sanctuary. She arrived on 3/21/17. At about 10 years old she remains shy around people not allowing anyone to come near but has made progress with small steps towards allowing people closer to her. There are some cats that she seems to want to make friends with and others that she is fearful of. She remains a slow work in progress learning to trust people. 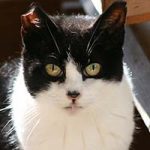 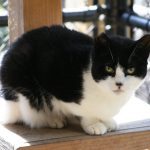 Summer in full swing – Josie is spending most of her days outside sleeping on her catio – coming in usually just at night to chill and relax. Her room mates have all been adopted so she doesn’t have any new friends to hang with just yet.

If you’re a cat lover without a lot of time to lavish on your pet or just love an independent cat, you and Josie may be a great match! She is a sweet girl and could also be a nice companion to another low-key kitty. Josie had lived outdoors as a feral cat. But due to a condition in one leg that affects her gait as well as limited hearing, she needs to stay safe indoors now. She may not be an Olympic runner but hops around just fine and is adorable! Josie is very shy around people and isn’t comfortable yet with close contact. But she could do very well in a quiet home where she can live quite independently or as an indoor barn cat. If you would like to learn more about giving this beautiful, special 8 year old the home she deserves please contact Donna at 860-242-9999 x 302 or Donna@ourcompanions.org.