Coming to the Sanctuary after his elderly owner moved to assisted living, this 12 year old guy had recently been diagnosed with diabetes and had been in the process of trying to regulate his Insulin. 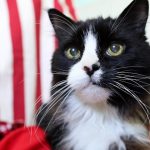 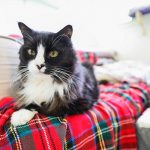 Ortega’s health has been all over the place lately. He had been showing more lethargic behavior than his normal upbeat self. Based on our Veterinarian’s observations, she believes it could have been a minor blood clot. Ortega does have pancreatitis which can cause flare ups of lethargic behavior and decreased appetite. Staff has been carefully monitoring his behaviors which have been very up and down. After a couple days of Ortega spending most of his time laying on the floor, another vet visit determined that he needs to be back on insulin and new medications. His kidney values have been high. The vet is suspicious that an electrolyte abnormality might be causing weakness. Despite all of the bad, Ortega has been a trooper and has slowly been improving in the days since. He recently has been finishing his meals and will go for short walks outside his room!