Prior to the Sanctuary, Acacia was living with two other cats, Maple and Oakley. All three cats were living in a home together until their owner could no longer keep all the cats when they moved. They were temporarily placed with a neighbor who was planning on adopting them out, but unfortunately he passed away. The three cats once again had nowhere to go and ultimately moved to one of the neighbor’s friend’s house. The friend couldn’t keep the cats long term and contacted Our Companions for assistance. Once there was space, Acacia, Oakley, and Maple moved to the Sanctuary to relax and recoup.

After several moves and several people in their lives, we made sure the three cats took their time to feel comfortable in their environment again. Maple came out of her shell right away and was quickly adopted. However, Acacia and Oakley proved to be much more sensitive. They continued to hide away from people and cower in fear. They spent most of their time on their “catio”, a fenced-in outdoor area connected to their room. They were staff only for quite some time to help keep their circle of friends small and to not overwhelm them with too many people.

Staff would often just sit in their room patiently to show them that people weren’t scary and that they were safe. The Cat Team were very patient and made sure to slowly work on building their trust. Eventually a few volunteers were allowed to continue the work of sitting in their room, respecting their space, and ensuring that these people were their friends. Eventually Oakley or Acacia would peek out of their hiding spots, maybe sit out in the open, keeping their distance, or even have moments of coming and sniffing their visitors. These small glimpses of confidence kept everyone hopeful that they would continue trusting their friends!

A big milestone for the pair was surprisingly the start of the Covid-19 pandemic.  During that time, volunteering was temporarily paused, the cottages were very quiet, and staff worked diligently to make sure all the cats still received their socialization and enrichment. Acacia and Oakley starting to come out more, approach their friends for cheek rubs, and even had moments of sitting next to their friends! It had been a while since there had been a change in their behavior; it was certainly a silver lining during that time! Once volunteering at the Sanctuary began again, Acacia and Oakley continued to be more social and would often come out to greet visitors consistently! The Cat Team was also able to get to know the cats more and realized the pair weren’t really bonded or dependent on one another and didn’t need to go to a home together if the right home came around.

An applicant was initially interested in another shy sweetie at our Sanctuary, but with our match-making process, we also suggested Acacia and Oakley as a potential match. The applicant immediately fell in love with Acacia and really wanted to help a shy cat blossom even more in a home. After three years with us at the Sanctuary, Acacia was finally adopted! On top of that, Oakley actually became even more confident and social once he had his room all to himself! He is still searching for his perfect match if anyone is interested in a sweet, shy guy!

Though the adopter was prepared for Acacia needing a considerable amount of time to acclimate to her new environment, Acacia decided to surprise everyone by how quickly she became comfortable in her new home! She even became more affectionate and sweet; you can just tell she knew that she finally found her person where she could let her guard down. Her mama tells us she’s an absolute sweetheart, purrs non-stops when she pets her, and makes a bakery-worth of biscuits!

They even made a Youtube channel for her to record just how adorable she is! They discovered she’s a night owl just like her mama and loves chasing her tail around in circles! They love finding different toys and enrichment activities that she likes, which includes chewing on her wheatgrass snacks! Words can’t describe the joy we feel seeing Acacia so happy and relaxed! We are so grateful we could provide a home for Acacia during those three years for her until she finally found her person to enjoy the rest of her life with! 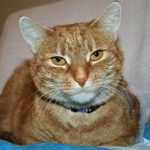 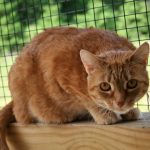 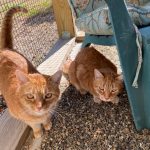 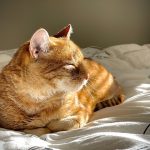 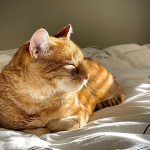 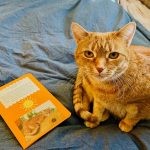 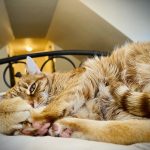