This poor little fella was found as a stray, and he certainly looks like he’s been living tough. Between his superficial wounds, big cheeks (indicative of getting into kicking fights with other males), and being found unneutered, who knows how long he was a stray! A good Samaritan brought him to the vet and they cleaned him up before bringing him to the sanctuary. He’s been a gentle giant, napping the day away in his sunny window bed or sitting next to volunteers on the couch for some head scritches. He’s super playful and loving. While here, we discovered a couple more medical issues, including some abnormally large kidneys and a parasitic infection. He’s in good spirits despite all the medical mysteries. 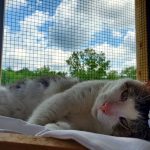 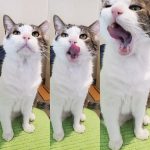 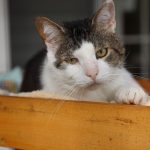 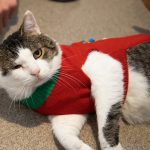 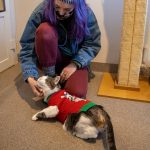 Gator’s appetite had been dwindling, which means staff has been giving him an appetite stimulant. He has been getting appetite stimulants which are helping him gain weight. He is no longer on dietary restrictions anymore which means he gets to be spoiled with yummy foods! Gator has also been able to spend time outside…walking on a leash! That’s right, Gator has been harnessed trained to walk in front of our cat buildings for extra fun enrichment time. At first, Gator was hesitant about the harness, but after some practice he has been exploring the outdoors like never before!

Are you looking for a snuggly, lovable, mellow purrfect lap cat? Gator has all of these traits and then some! He is an 8 year old handsome boy just looking to snuggle up with someone and would make an excellent companion. You really can’t find a cuter or more perfect cat! Gator is FIV+, however cats with FIV can live long, normal healthy lives and can live happily in a home with other cats as long as there is no extreme aggression and a proper introduction is done. If you think you could be his forever person please contact michelle@ourcompanions.org or 860-242-9999 ext. 302