Wavy came from a home where he had lived with another cat for seven years in a relationship best described as tolerable.  He’s had numerous urinary issues over the years with stress likely being a contributing factor in his health problems.  In April 2020 Wavy and his long time roommate had a disagreement of an irreconcilable nature and the two had to remain separated from them on.  Numerous attempts at reintroductions failed and the owner felt for everyone’s benefit Wavy needed to find a new home of his own where he could relax and just enjoy a more carefree life.  At nine years old Wavy has joined the Sanctuary to begin his search. 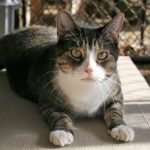 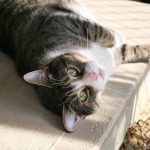 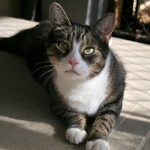 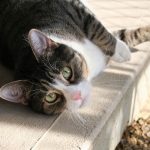 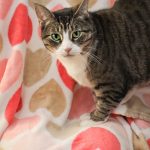 Wavy’s been spending more time outside on his catio enjoying the weather-especially windy days and watching the leaves blow by. He still quickly comes in to spend time with visitors and always happy to have some lap time.

Meet 6 year old handsome Wavy Gravy. He’s looking for his forever home to be the only pet to receive all the lap time he wants and lots of playtime. He has a good appetite and enjoys being around people. If you think Wavy may be a purrfect fit in your home contact michelle@ourcompanions.org or 860-242-9999 ext. 302.