Scout is a neutered male pitbull mix who arrived at the Sanctuary from a local Animal Control who had found him as a stray. He was in need of emergency veterinary  treatment when they found him– his ears were infected, and he had a wound on the side of his face that also needed medical care. Once his hold was up they contacted us to take him in. Scout’s exact age is unknown, at first he was thought to be over 10 years old, and his name at the shelter was “Old Man”. Now as he’s been with us he’s looking to be younger, probably around 7 or 8 years old. 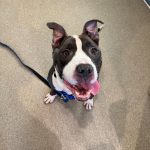 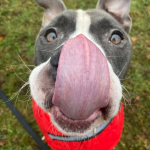 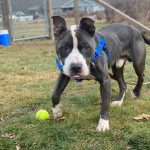 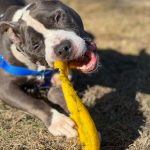 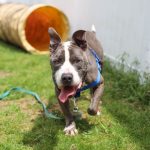 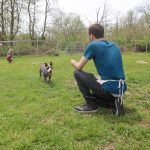 Scout recently had a surgical procedure on his right ear (a Total Ear Canal Ablation with Bulla Ostomy) to eliminate the constant ear infections that he has had since coming to the Sanctuary. He is currently healing from the surgery. We are hoping once we get him past this that his ear troubles will be all in the past and that he’ll be ready to leave us. Scout is a wonderful companion, and has been amazing throughout all the care that we’ve had to give him.