Sweet and petite, a Norwegian Forest cat named Gigi was living with her person since she was just a kitten. Now at 15 years old, her person had to enter an assisted living facility and was unable to continue caring for Gigi. The owner’s grandson took over care for Gigi in hopes that she could integrate with his other pets in the home. After some time, it was clear neither Gigi nor the other cats were able to cohabitate happily in the home. Gigi had to be separated in her own room, and though she was well-cared for, the grandson knew she deserved a home where she could be the queen of the castle in a home of her very own. He made the difficult decision to rehome Gigi and contacted Our Companions for assistance.

Besides being diagnosed with hyperthyroidism, Gigi was in excellent health! Gigi’s hyperthyroidism was well-managed with medication and Gigi had no problem being pilled. She would go from purring up a storm, to being pilled, and quickly went back to purring! Gigi was 5lbs of pure love and cuddles! She seemed to sneak out the closest lap for pets or the comfiest bed to make biscuits and purr herself to sleep. She didn’t mind being picked up and could snuggle right into your neck like a little baby! With how gentle and kind she was to everyone she met, it was obvious that she had been loved and cherished her entire life. And it was our job to make sure her next home continued to be filled with the utmost love and care!

As we promoted and marketed Gigi available for adoption in our rehoming program, we received an application from a woman seeking a cat for her mother. She was seeking a senior cat that loved to sit on laps and would enjoy being adored and cherished. Gigi certainly fit the bill! We scheduled a meeting with everyone- the woman, her mother, the grandson, his partner, and of course, Gigi. We went over every detail about Gigi’s background, her story, likes/dislikes, her care, and more, to ensure this would be a great match for Gigi. The mother had a ton of family support that lived close by and would be actively involved in Gigi’s care as well. The applicant’s nice, quiet lifestyle seemed perfect for Gigi to truly be the doted queen that she deserved to be! Everyone was on board to move forward with the adoption!

As always, we check in with our adopters to see how things are going post-adoption and provide any guidance with the transition. After just a couple days, we were told, “They are doing great. Gigi is such a sweet cat. Gigi is letting mom share the chair. At night she snuggles up to mom in bed. Mom has a cat stuffed animal that Gigi likes to cuddle with as well. Gigi is getting tons of attention and love.” Over the next few weeks they let us know that Gigi sleeps on the opposite side of the bed every night, and will hop on her mama’s lap every time she sits in her chair, just being petted and loved- the only thing Gigi ever wanted! In just a short amount of time, they already seem so bonded and obvious that they truly loved each other. She even went for a vet visit where the vet was very happy with how Gigi was doing!

We’re so grateful that our rehoming program was able to bring these two families together to create a happy next chapter for this lovely girl. It was wholesome to see how much love there was between her current family and the next! We give thanks to all the people in her life that loved and cared for Gigi throughout the years, and wish Gigi and her mama many memories full of purrs and pets! 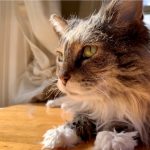 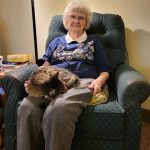 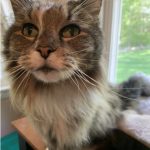 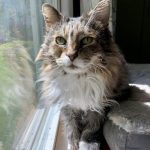 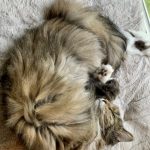