He was surrendered to the Meriden Humane society as a 6-7 month old kitten. He was adopted out and living in that home for about a year and a half, but was returned due to aggressive behavior towards a human. He was adopted out again, but returned 6 months later due to aggression towards another cat in the home. Before coming to us he had spent the previous 8 or 9 months in a cage with little interaction. He is about 5 years old and suffers from a rare condition called an esophageal stricture which limits him to wet food and treats only. 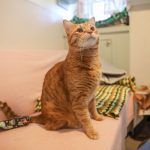 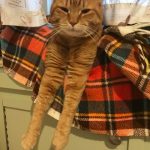 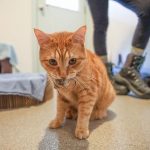 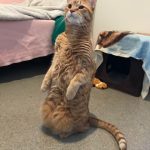 Linus is doing well here at the Sanctuary. He as shown little aggressive behavior and loves people. He loves to play in his tall cat tree with ribbon toys, and is learning clicker training. So far he is working on petting and “sit”. He also loves to play underneath the door with turkey feathers!

Linus is a 4.5 sweet, affectionate and playful guy looking for his forever castle where he can be your one and only. Linus doesn’t like to share the spotlight and wants to be the ruler of his kingdom. Linus loves to play and chase the interactive wand toys, will show you his bunny kicking skills with his kicker toys and would love a forever home where he can play to his hearts content and then curl up and snuggle in for a quick cat nap. Linus does need an adult only home or one with older children as he needs a family to recognize when he’s ready for another play session to work out his energy. If you think you could be this dapper gentleman’s forever home contact [email protected] or 860-242-9999 ext. 302.