Just under a year old, young Rio was brought to our attention when we were contacted by a local animal control officer. Rio was in a municipal shelter, displaying lots of energy, mouthiness, and reactivity around unknown people and traffic. They were worried about placing him and asked us for our help. Understanding he needed plenty of exercise, socialization, and training, Rio arrived to our Sanctuary in 2013.

Being basically a puppy with no training and a lack of socialization, our team got to work! Rio received tons of exercise, play time, and positive reinforcement training. Our very own CEO, Susan Linker, even brought this young fella to our Canine College classes!  Rio was super smart and loved all the attention and exercise he was getting! He was greatly improving with his reactivity and mouthiness and we were ready to start finding his perfect match! During the few months he was with us, the team learned more about Rio and his needs for his future home. Rio needed a person that would continue giving him the exercise and play time he needed to relax. He appreciated a quiet, calm home, with no young children, and someone who was home often to give him lots of attention! We were happy to have found his person, a woman looking to devote her time and love to a canine companion and was happy to meet this young guy’s needs!

Like every adoption, our adoption team followed up with Rio and his adopter in certain increments of up to a year to make sure the pair were doing well. He got lots of walks, plenty of fetch time, and had his favorite chair by the window to monitor the neighborhood! As the years went by, we didn’t hear too much from Rio and his adopter. Suddenly, about seven years later, we were contacted by Rio’s adopter in desperate need of our help. She had sadly been diagnosed with a terminal condition, leaving her very little time left. She was selling all of her belongings and moving out of state to be with her daughter in the next month, and wouldn’t be able to bring Rio with her. With our lifetime promise, a life-long commitment to be there for every animal we have cared for, we immediately stepped in to help with this dire situation.

Meeting Rio seven years later, it was obvious he knew something serious was going on. He was very anxious and overly attached to his one and only owner. He could feel she was in distress, which made him even more nervous and frightened, especially when separated from her. It also didn’t help that his home and belongings were being packed up and moved around. Over the years, Rio had his small circle of friends, now he suddenly had to meet new people while dealing with his life being turned upside down. Going through applicants to find a good match for Rio, we had a few meetings that didn’t quite turn out to be the right fit. Eventually, a couple came along seeking a small dog and were willing to help with any challenges that might arise. Most days they worked from home and were able to give their furbaby plenty of time and attention to transition and thrive. Upon meeting them, Rio was full of anxiety, nerves, and unable to relax or focus on meeting these prospective adopters. Still, the couple weren’t overwhelmed or deterred by Rio’s initial meeting, but instead they saw a dog in desperate need of a loving home. After a couple meetings and a home visit, Rio was slowly becoming more comfortable with them. Ultimately, they wanted to give Rio the support and care he needed. His previous owner felt a huge sense of relief knowing that Rio would be safe and loved.

After his second adoption, we stayed in touch with Rio and his new family to see how the transition was going. There were a few bumps along the way, but we were so incredibly happy to hear that he was doing so well with his new mom and dad! They sent us lots of pictures of him cuddling, playing, and overall being a very happy guy! They helped work on Rio settling into his new home and routine, and even got Rio more comfortable with being left alone. Over the summer he met lots of their friends and dog friends, and became quite the social butterfly! They kept Rio busy with lots of activities and made sure he felt safe with lots of attention and snuggles! They just celebrated his one year adoptiversary with them this past February and things couldn’t be going any better! His mom and dad sent us this update:

“We can’t believe it’s already been a year with Rio! Since we last talked, Anthony and I had a couple of trips out of state, so Rio got to hang out with some friends while we were gone. He loved all the attention, but was very happy when we got back. At his last check up, the vet was happy with his weight. He keeps active with lots of playing around the house and also loves a good snuggle under the blanket when it’s chilly. Looking forward to warmer weather so we can do more outside activities again!”

It’s been a long road for Rio, but we’re so grateful we can be there for him every step of the way in making sure he is loved and well-cared for, and have found a family that has done the same. They know they can always contact us for any support or assistance further down the road with Rio. We wish Rio many more years of happiness with his family and home! 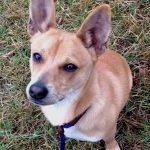 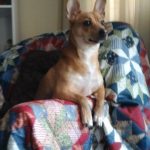 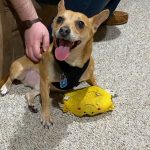 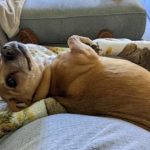 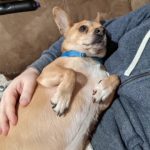 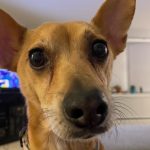